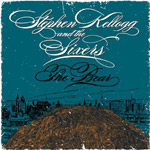 Jonathan Keefe (Slant Magazine): With no shortage of singer-songwriter acts cluttering up the indie-rock and Americana landscapes, it’s often difficult for artists to distinguish themselves from the Ryan Adamses, Josh Ritters, Josh Rouses, and Ben Kwellers of the word. That’s something Stephen Kellogg and his band the Sixers have struggled to do over the course of their career, having kicked around in the minor leagues and on the college circuit for well over a decade and even landing a brief stint with a major label, but their latest effort, The Bear, is an attention-grabbing, self-assured set.
read more

“I’m happy to say the album absolutely delighted me. The Bear is easily Kellogg’s finest effort to date.” ThatGuy / Hear-Ya