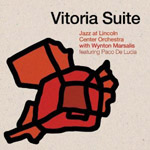 “Vitoria Suite is inventive, vitalising, superbly performed and totally engaging throughout its 90+ minutes playing time.” Chris May, All About Jazz

Vitoria Suite, as Wynton titled it, is a 12-part work, the structure inspired by the 12 measures of the blues. Marsalis uses the impulse of the blues as a foundation to jointly explore the music of two worlds and two cultures: the jazz and blues of North America and the indigenous Basque music and flamenco of Spain. Granted, there’s a lot of cultural territory in between them, such as the whole of Africa, the Caribbean, and South America, but Marsalis shows how much the two locations have common, musically if not geographically. Wynton notes that, “As outsiders, it’s not possible for us to play this music in the same way that a Spanish musician would, so instead I’ve tried to take elements of the music of the region and translate that into the sound of jazz.”